All of us have been a little nuts over the Seattle Seahawks after their amazing season last year and win at the Super Bowl.  Honestly, it’s kind of crazy watching folks walk around any time of the year wearing Seahawk gear.  We’ve never really experienced that here.  Yarn and knitting projects fall right in line with all of it.  Here is Barbara of Arlington wearing the Seahawk Cowl that she made.  She was participating in a KAL through the Fancy Image Yarn group over on Ravelry, and decided that she would knit a cowl instead of hat, but still use the graph and chart of the pattern she chose, IV. Jonathan Anderson’s Cap by Carol A. Anderson.  Barbara used Fancy Image Yarn Merino Wool DK.  The pattern can be found in the book, Scandinavian Caps for the Guys by Cottage Creations.  If you are on Ravelry, look us up! 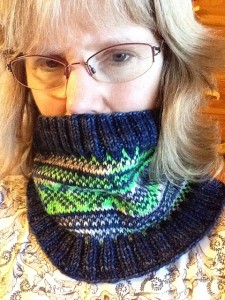